5 Ted Talks That Will Make You a Better Content Creator

For entrepreneurs, content creators, and marketers, TED Talks are a go-to resource for information about nearly any topic. The non-profit has thousands of videos that cover an array of fresh ideas and concepts, each presented by a subject matter expert or thought leader in their respective industry. By far, it's some of the most engaging content on the web, and people use TED Talks all the time to foster personal and professional development.

However, in addition to the topics that TED Talks cover, there is a lot to learn from the execution of the TED talks themselves. The speakers at TED are some of the most charismatic speakers and talented story-tellers in the world and can teach you a lot about content creation. If you look aside from the subject matter, you can examine any TED Talk and find tactics that the speakers are using to intrigue and hold the focus of their viewer. 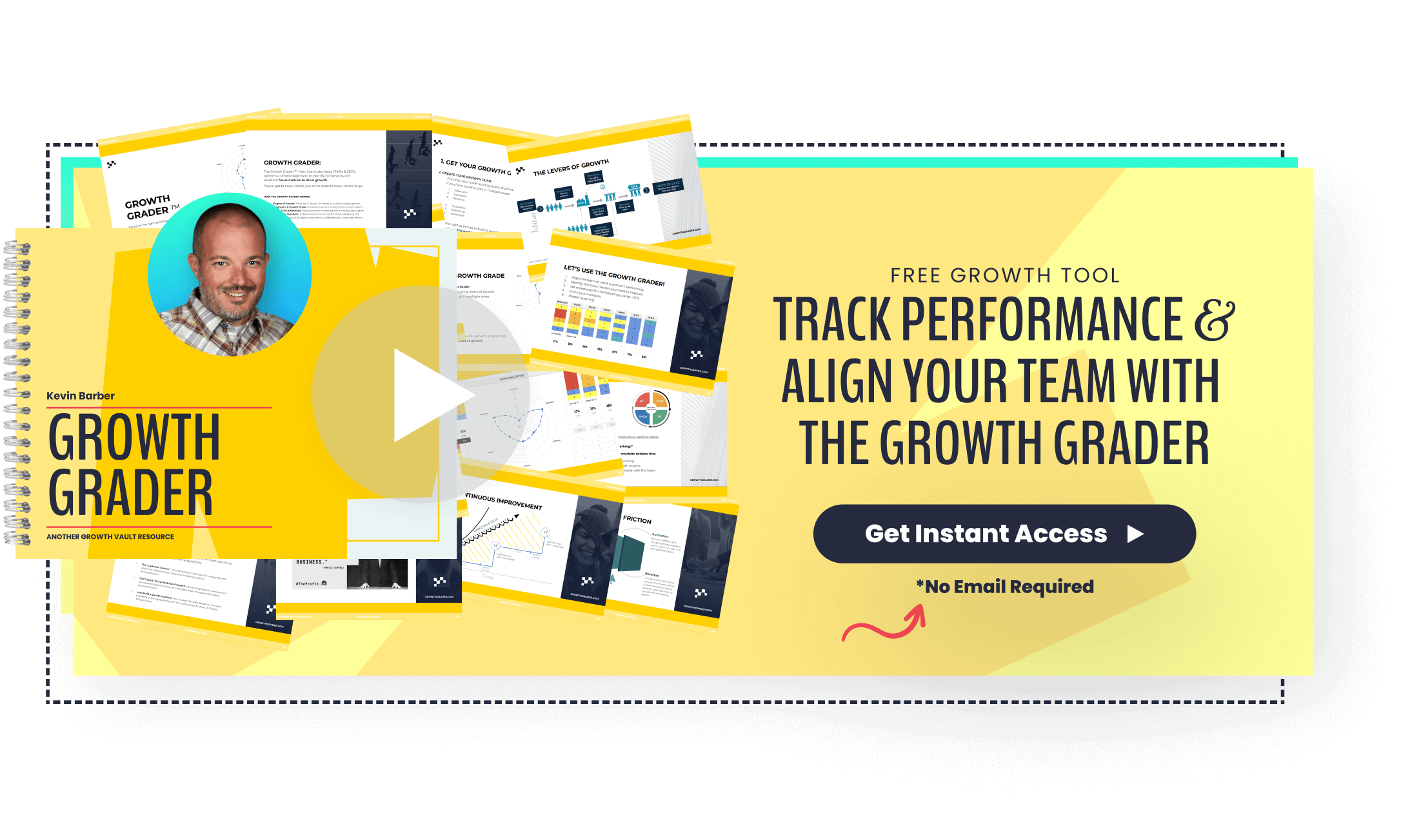 TED Talks are excellent because they discuss interesting ideas and help make complicated subject matter digestible. However, the reason that TED is so successful with conferences and content creation is that their speakers understand how to tell a story and grab the attention of their audience. It's a difficult skill, but an area where most of the TED speakers excel.

In this article, I'll break down the formula of a few TED Talks, and explain the story-telling tactics every speaker uses to craft a better story.

In Adam Grant's TED Talk for TEDxVancouver, "Surprising Habits of Original Thinkers," Grant talks about how to recognize what he calls "originals," based on his experience with top-recognized eyewear brand Warby Parker. Parker was slow to launch their website, and Grant was put off by the delays, so he opted not to invest in the company. Now, Parker is worth nearly $1.75 billion.

With that experience under his belt, Grant now describes originals as free-thinkers that procrastinate, but have flexibility and better ideas because they don't rush to finish. 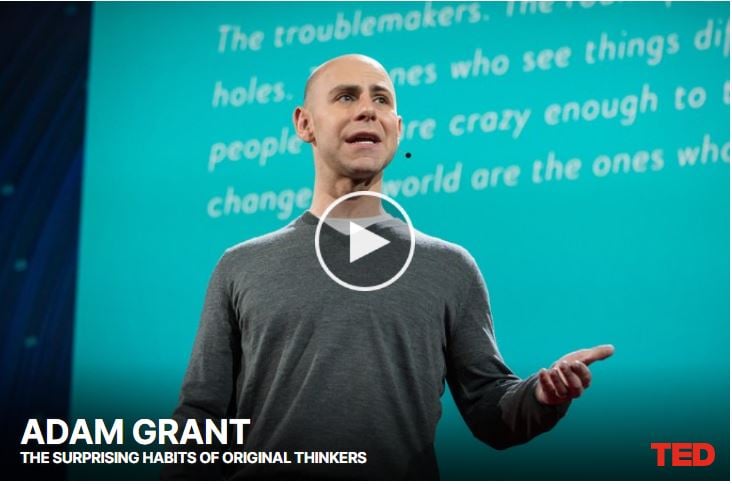 "Originals are nonconformists, people who not only have new ideas but take action to champion them. They are people who stand out and speak up. Originals drive creativity and change in the world. They're the people you want to bet on. And they look nothing like I expected." - Adam Grant, New York Times Best Selling Author, Organizational Psychologist

Whether you're writing a blog post or a video, there are a few tactics that Grant used to strengthen his message that you can apply to your content.

Grant uses all of these elements to put together a compelling story that delivers on the promise of his title.

Many of us believe that if you work harder, you'll be happier. Right? According to Shawn Achor, a speaker for TEDxBloomington, not necessarily. The idea that hard work leads to happiness is a concept that Achor calls "scientifically broken and backwards." 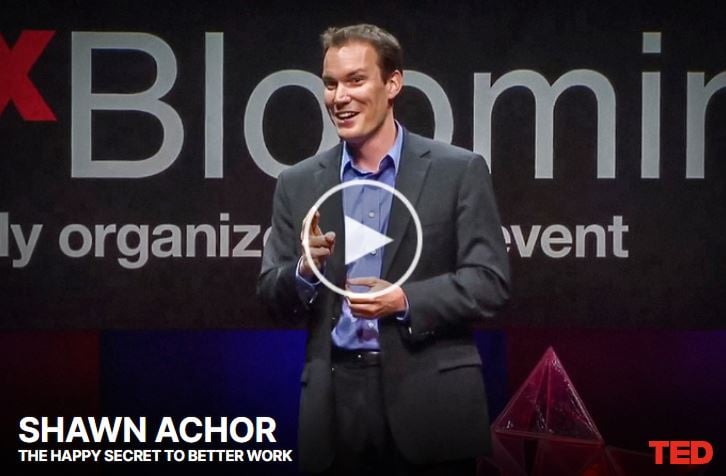 "If happiness is on the opposite side of success, your brain never gets there," says Achor. "If you can raise somebody's level of positivity in the present, then their brain experiences what we now call a happiness advantage, which is your brain at positive performs significantly better than at negative, neutral or stressed." - Shawn Achor, CEO of Good Think, Inc. 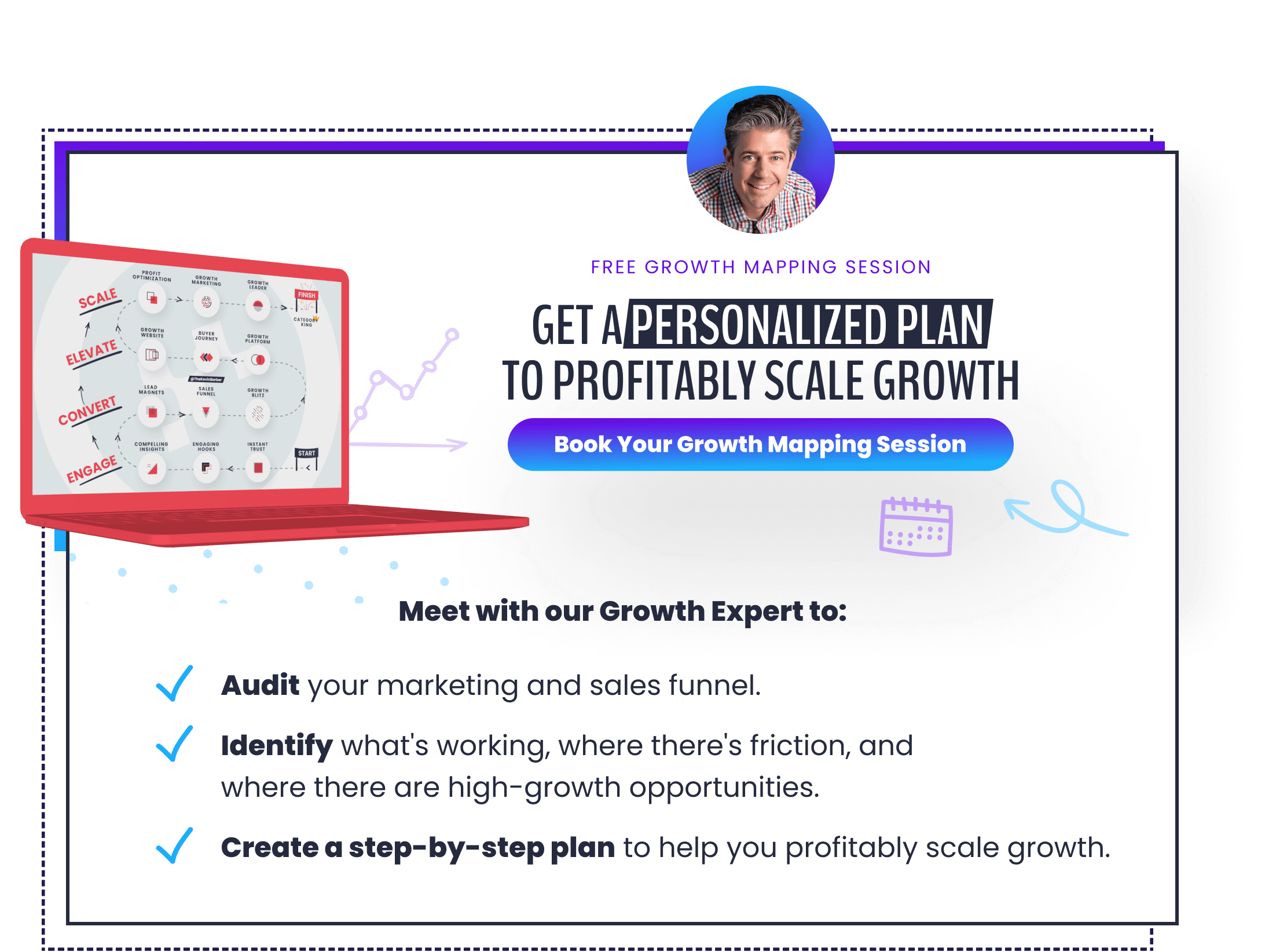 Shawn's talk is incredibly useful for a few reasons, including:

By the end of his TED Talk, Achor comes off like a real subject matter expert and communicates a challenging concept to his audience.

Tim Ferriss, "Define Your Fears Instead of Your Goals"

In his TED2017 Talk, Tim Ferriss talks about how to overcome fear and depression to achieve your goals. The talk goes into detail about how he works through the paralysis that fear can cause using a practice called "fear-setting." 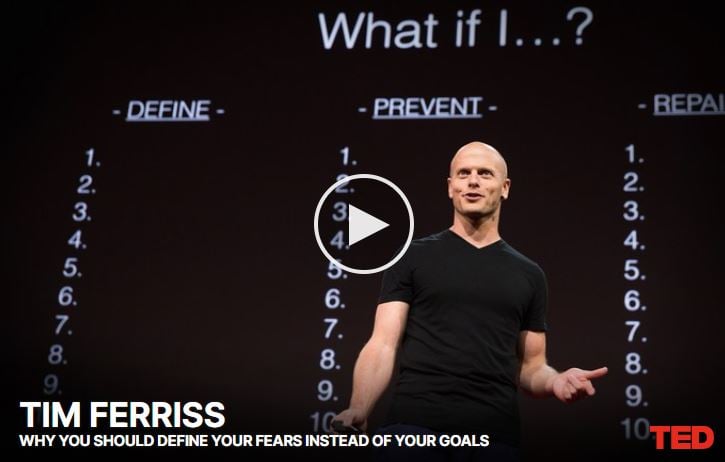 "I can trace all of my biggest wins and all of my biggest disasters averted back to doing fear-setting at least once a quarter. It's not a panacea. You'll find that some of your fears are very well-founded. But you shouldn't conclude that without first putting them under a microscope. And it doesn't make all the hard times, the hard choices, easy, but it can make a lot of them easier." - Tim Ferriss, The Four-Hour Work Week

One of the most successful aspects of the Ferriss TED Talk is how achievable he makes fear-setting seem. He grabs the attention of the viewer because he's helping them move forward through their day-to-day challenges. 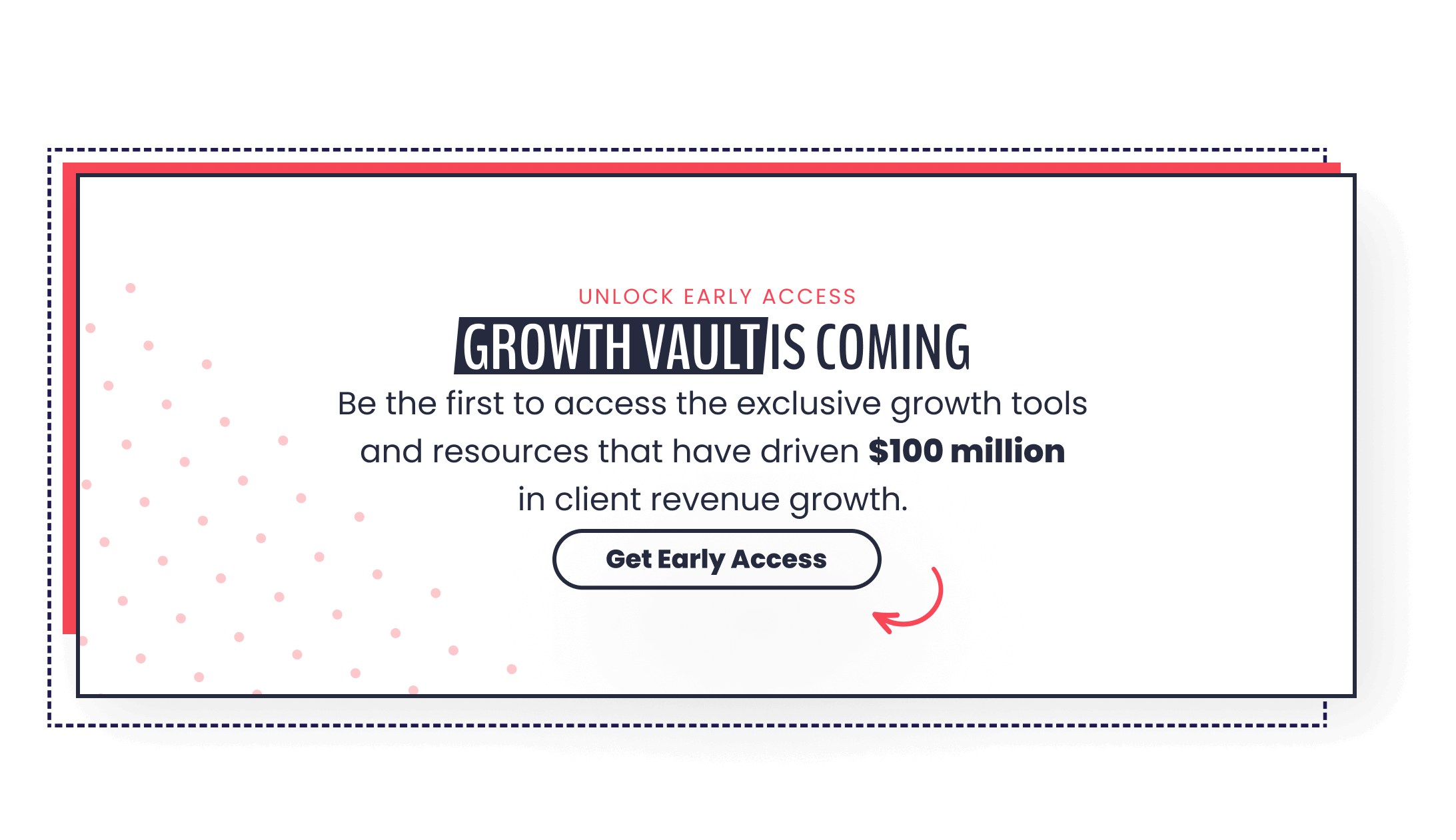 James Veitch, "The Agony Of Unsubscribe"

Comedian and British writer James Veitch taps into the frustration of trying to unsubscribe from email marketing at TEDSummit, describing an experience he had with a local grocery store. When the store did not remove him from their list, Veitch proceeded to set up an elaborate prank to reply to each of their automated emails, resulting in a nearly 21,439 back-and-forth. 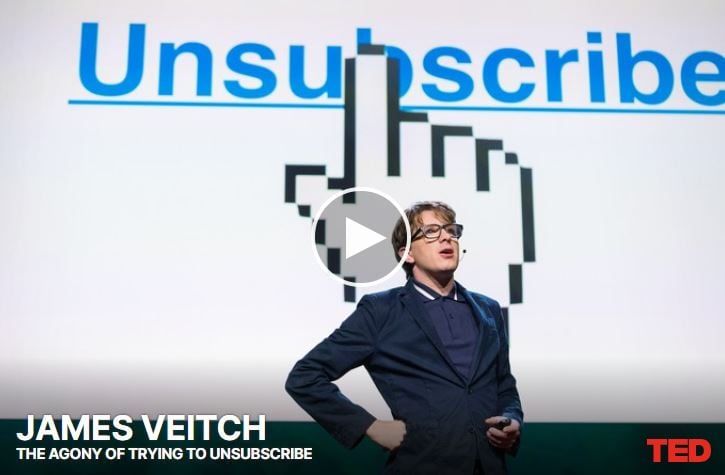 "If ever you feel weighed down by the bureaucracy and often mundanity of modern life, don't fight the frustration. Let it be the catalyst for whimsy." - James Veitch

There are a few key takeaways to use for your next blog post or web video, based on Veitch's discussion:

Overall, Veitch's distinct personality is what makes this talk so compelling. Even if you struggle with humor, you can leverage what makes your brand unique and special and adopt that tone to stand out with your content.

Patrick Chappatte, "The Power of Cartoons"

In a recording of his talk at TEDGlobal2010, cartoonist Patrick Chappatte explains how illustrations and cartoons can help address global issues and bring people together. Within a short amount of time, Chappatte covers the history of comics in media and touches on their role in the future of journalism.

"This is more serious than maybe editorial cartooning. I went to places like Gaza during the war in 2009. So this is really journalism in cartoons. You'll hear more and more about it. This is the future of journalism, I think."- Patrick Chappatte, Global Cartoonist

The TED Talk covers a lot of ground but breaks down complex ideas by:

There are a lot of things to unpack from this TED Talk, and it's a great lesson about creating in-depth, descriptive content without losing your viewer.

If you can speak directly to your audience and learn how to tell a compelling story, it will be easier to craft better content. Despite being under the TED brand, a lot of speakers are relying on their personality and experience to connect with the viewers. As a result, the content that TED produces is more relatable, engaging, and memorable. That's the kind of material that goes viral, builds communities, and brings back an audience again and again.

However, many of the TED speakers make it look so easy, and we know that it's not. Aside from the actual story each speaker is telling, there's a lot of branding, expertise, and positioning that goes into developing such a strong voice and level of authority in your space. If you're looking to establish a stronger brand and master this type of content creation, we can help.

With our Game Plan offer, we collaborate with brands to discuss developing more effective strategies and how to build the strong foundational elements that lead to long-term growth and success. 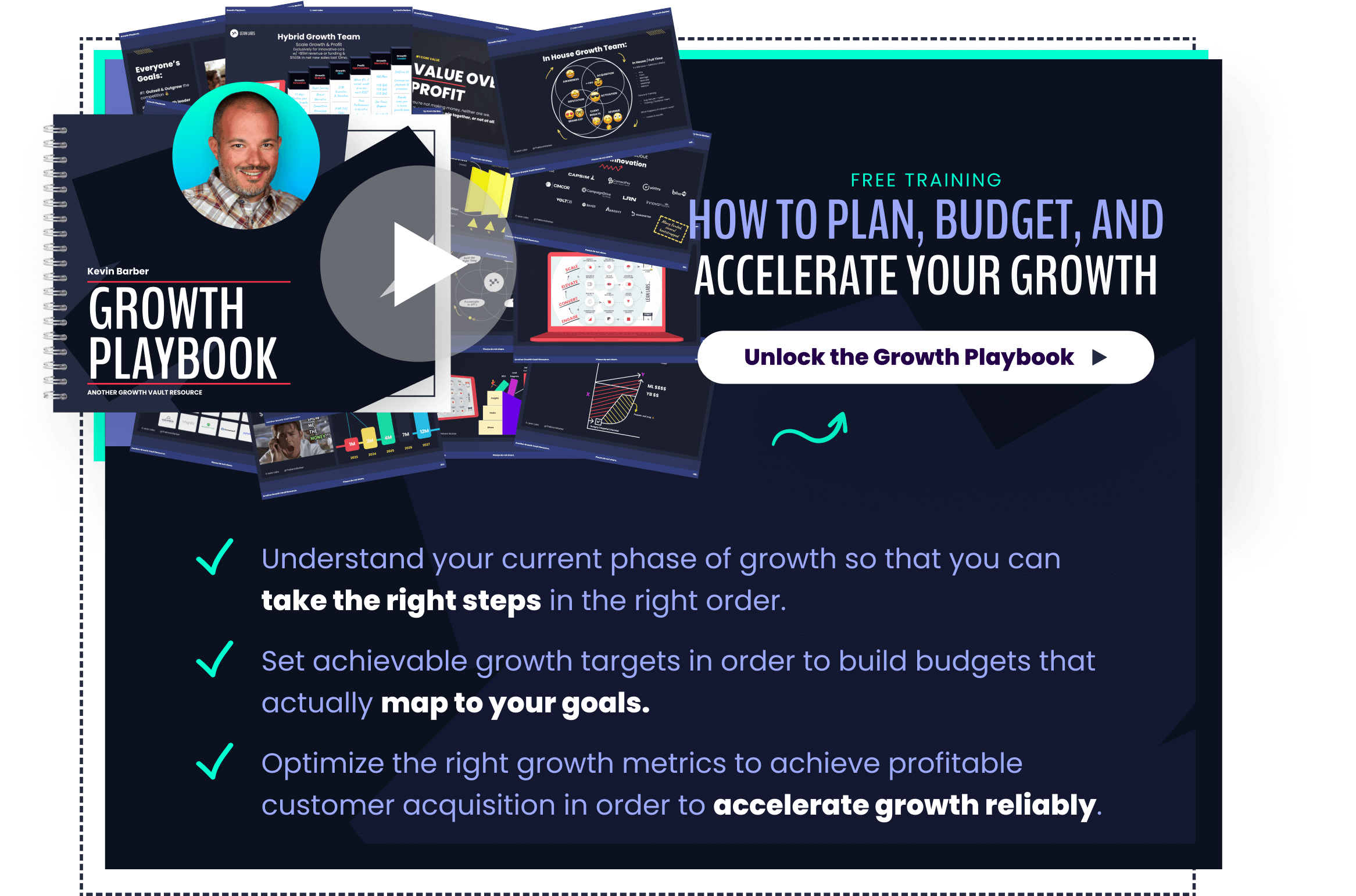