5 Marketing Mishaps and How You Can Avoid the Same Fate

Marketing mishaps are going to happen.

It's part of taking risks as you find the next viral ad or content. But when mistakes are made, the magnitude can cripple your business. For some, the destruction is so overwhelming, there's no coming back.

Still, it doesn't mean you can't reduce the potential for failure. This article offers lessons on marketing mishaps, so you don't make the same mistakes.

Marketing Mishaps You Can Learn From

If mistakes were avoidable, you wouldn't see the ones we're about to show you. Sometimes, even the best intentions are misconstrued, and you find yourself floundering, doing anything you can to reduce the damage.

And while you shouldn't want someone to fail, you might as well use their mistake to learn something. It's not the only way, but it's a great technique to avoiding the issue for yourself.

Last November, Dolce & Gabbana released a marketing campaign that brought them immediate attention, only, not the kind they were looking for.

The advertisement presented a Chinese model attempting to eat Italian cuisine with chopsticks.

Discounting the sexually suggestive narration (you can judge for yourself), viewers grew outraged at the stereotyping of the Chinese. The ad made it appear as though they were culturally oblivious to the rest of the world, and poked fun at their heritage.

Lesson: Be Wary of Cultural Sensitivities

What is intended as a stab at humor may also offend others in the market. It's imperative that you tread lightly when dealing with potentially sensitive issues.

If you don't understand the cultural norms or stereotypes you may be touching, find someone who does and ask them to review your work. One simple check could save you months of damage control.

Snapchat's initial marketing plan focused on promoting celebrity accounts to get other users engaging with the platform. While this worked for a while, one tweet in February caused Snap to lose over $1 billion in market value overnight.

Kylie Jenner tweeted that Snap's redesign made it more difficult to enjoy the app and the comment quickly gained support from other users.

When dealing with influencers, especially celebrities, there's risk involved. Influencer marketing joins your brand with a personality, and that can have disastrous effects.

Even if you're not paying for endorsements, continually promoting the celebrities who use your product can have the same impact. This makes it extremely important to give these personalities an open channel to share feedback with you so that they can discuss issues. Being heard will make them less likely to ridicule your brand publicly, and they may provide insights into how you can strengthen your product.

Though Jenner's tweet was quickly followed up with a "still love you tho..." message, the damage had been done. Snap was able to bounce back from their loss, and on their next innovation to the app, they even pulled Jenner back in as an influencer.

Adidas attempted to congratulate finishers of last year's Boston Marathon with a friendly email, but their message shared a surprisingly offensive subject line.

Thought it's not uncommon for people to consider the completion of difficult feats as "surviving," the subject failed to take into account the bombings of 2013. 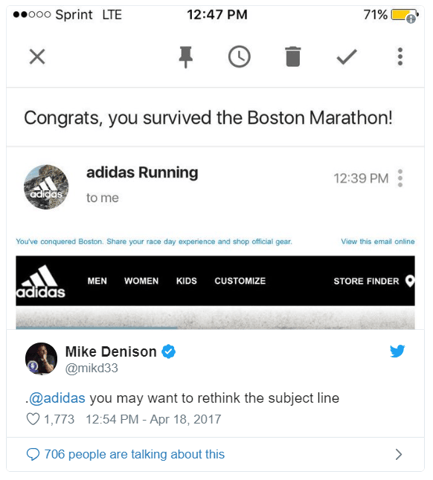 Lesson: Use a Common Sense Check

While it's (mostly) evident that Adidas wasn't trying to push an insensitive subject line on the race competitors, the damage had already run its course.

Don't hit publish on content, especially advertisements or time-sensitive materials, without running it through a common sense check. Having someone else look at it is a bonus.

And if you really don't have someone else to look over your work, and you think it looks okay, do yourself a favor and run a simple search online anyways. We all know it would have saved Adidas from this mishap.

Airbnb is continually looking for exciting destinations that people may want to visit. Unfortunately, their timing couldn't have been worse when they sent a marketing email featuring a "Floating world" theme.

On its own, it seems harmless. The rentals are all boats or floating homes, and copy reads, "Stay above water." Where they messed up was when they published the campaign at the same time Hurricane Harvey submerged Houston. 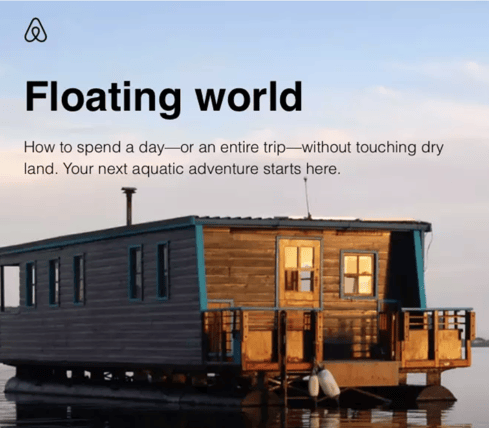 Lesson: Keep Up With The News

Similar to the Adidas mishap prior this, Airbnb could have avoided any issue if they'd presented their campaign at a different time.

A search for trending topics in the news could have keyed any of their staff into the potential backlash they'd receive from the campaign.

Current events can be fun and useful to capitalize on with your marketing efforts, but doing it incorrectly can leave you reeling.

Sometimes, other media will offer an opportunity for your brand. This happened to McDonald's when adult cartoon Rick and Morty featured an episode about their limited edition Szechuan sauce.

The sauce was initially released in 1998, paired with Disney's Mulan, but thanks to one episode of a show, fans petitioned for McDonald's to bring it back. Last October, they obliged.

When the product ran out, police had to be called to multiple locations to handle enraged customers. And to make it worse, when McDonald's promised to deliver 20 million packets of the sauce across the United States, they failed to accomplish it.

There were two issues with McDonald's sauce release. First, they severely misinterpreted the value of the sauce. They ran out in record time, and some packets were auctioned for nearly $1000 online.

Separately, they didn't account for how over-hyped their product had become and when some actually tasted the sauce, they took to social media to express disgust with the product.

Though the perceived value of the product was significant, it was elevated because of scarcity, not because the sauce was truly worth it. Understanding the true value of your product will help keep customers happy and build your brand as one that delivers on promises.

Avoiding Your Own Mishaps

While you may make some of your own mistakes along the way, learning from other companies can save you from the embarrassment and clean up. Get as many eyes on your campaign, from as many different backgrounds as you can to ensure you're not publishing something offensive.

And while you may take every precaution, there's always a chance someone finds something to complain about. Roll with the punches and decide what you're willing to stand for. Like we said, taking risks is necessary for finding the next big thing.

If you want to take a less risky approach to marketing, one that draws potential customers to you, we've got an eBook just for you. Conquering the Inbound Marketing Mountain is your guide to creating better personas, building a content calendar, and setting the goals you need to succeed. Download your free copy now.