A one-word, concise description for growth-driven design (GDD) would have to be adaptation. The same goes for fruit flies, flu viruses, and humans who adapt in response to their environment. Adaptation, after all, is the key to survival!

Here at Lean Labs, we are staunch advocates of allowing your website to continuously metamorphose into a robust, responsive online presentation of your brand. As Hubspot's Peter Caputa pointed out -- your website talks to way more people than your average salesperson does every day.

Learning from Marks and Spencer

GDD is a new way to think about website design and optimization. Many marketers still fail to identify the telltale signs that their brand needs the more sophisticated GDD approach. What's worse is they remain loyal fans of the traditional redesign route.

The retail giant Marks and Spencer learned it the hard way. When they opted for a redesign that was two years in the making and involving nearly 50 software developers, online sales went down by 8 percent after the launch. A flurry of irate and frustrated customers also ensued due to difficulties in password reset and website navigation issues.

Do you employ the same redesign approach as Marks and Spencer? If you are, we urge you to reflect on the following pitfalls that GDD can remedy:

This is just another way of saying that the boost in leads or conversions that you hoped for are nowhere in sight.

Here's a typical scenario. Once the new website is up and running, everyone's happy and satisfied with the overall results. The sales people got their landing pages in place while the crew from recruitment are delighted with the new Careers page. As months go by, mild panic and unease starts to creep in. Why are prospects not signing up for the newsletter? What's up with the high bounce rates?

The truth is you were blindly crossing your fingers that it will deliver (as assumed) instead of performing GDD's split testing.

GDD is anchored on data collection, split testing, and user experience. Often, a standard web redesign is based on the industry's best practices by looking at trends and educated guesses. However, what's considered as best practices in June may not be the most efficient come December.

Additionally, growth-driven design follows a progressive loop of fact finding, testing, and providing feedback. There is no finished product because the entire site is constantly adapting based on the results of your testing. Small yet calculated changes trump what was thought before as best practice: a major (but oh so careless) overhaul.

The Need for In-House Designers and Developers

After your traditional website redesign is done, potential and existing bugs need ironing out. Hence, you remain at the mercy of developers and designers. This means you have to shell out another set of funds on top of the $15K to $100K you've spent upfront for the redesign

Your monthly retainer gives you access to our developers and designers who can help you out with the technical kinks once your launchpad site is up. The team will happily back you up during the entire growth-driven design cycle (second phase) and employ the results from the split tests into the redesign. The changes that didn't work are discarded as your new website takes on a new, improved form.

This could work for large businesses and brands who want just to get it done and move on. Yet, for small and medium enterprises, the large sum paid at the beginning of the project can be a significant dent in the wallet.

Pay As You Grow

A launchpad website typically costs $15,000 to $20,000 while the monthly fees will largely depend on your budget and the changes that you want to incorporate to create the best user experience possible. An added benefit is you also don't have to shoulder the fees for fixing and maintaining the site. The all-inclusive monthly retained takes care of that.

Often, it takes more than a year (it took two years for Marks and Spencer!) to redesign the whole site, from the brainstorming process to launch date. Not to mention that the strategy employed is grounded on what will be successful in theory.

In between months of waiting for the new website to materialized, brand goals have eventually shifted, or certain products may have been called off. What's the point of using the supposedly updated site when numerous changes have taken shape? And oh, only 49 percent of website redesign projects finish and launch on time.

The test-as-you-go method of GDD gives traditional website redesign a run for their money! A standard redesign doesn't have a launchpad website (takes between 4 to 8 weeks to launch) that will serve as your testing ground. Nor there will be an in-depth examination of your target personas, tinkering with customer journey maps, and creating action items that you want to implement.

According to Luke Summerfield of Hubspot, these <strong">action items typically fall in the following four categories:

Growth-driven design accomplishes more than just a website. It provides an opportunity for your brands to explore countless possibilities for the highest chance of conversion possible. In hindsight, it becomes a marketing asset, allowing your site to adapt and eventually survive.What action items do you look forward to including in your growth-driven design cycle? Your opinions are valuable to us so share 'em in the comments! 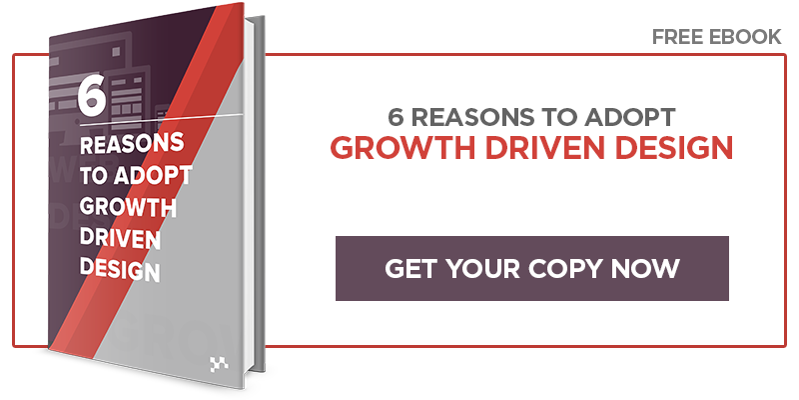