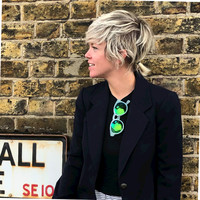 To content marketers, organic traffic is THE metric to gauge performance. It's the reason we all invest so much in SEO content writing. Because with the right material, you can attract customers and demonstrate your thought-leadership and expertise. However, given that it’s becoming much more difficult to rank, content marketing isn’t always a surefire thing.

There are too many ranking factors and too much competition to merely write blog posts and expect to get traffic right away. It takes a while to gain significant ROI from content. That’s why a good content strategy isn’t enough.

You need to steal traffic from your competitors.

SEO content writing is the practice of writing to rank on the first page of Google for a targeted keyword or key phrase. But for Marcus Sheridan, SEO content writing has always been so much more. Because before he was a marketing guru, Sheridan had a company that installed fiberglass pools.

When he was in pool installation, Sheridan started to invest in SEO content writing. He wrote articles about competitors, listing 4-5 other companies in the area that provided the same service as his company. However, instead of talking about their weaknesses, Sheridan wrote about them in glowing terms.

At the end of the article, he would pitch his company, and say that they would also like the opportunity to earn their business. The unconventional, but effective SEO and content marketing tactic, helped him accomplish critical objectives.

#1. He built incredible trust with his prospects.

It’s critical to build trust with your prospects, which is the entire point of investing in content. With the right material, you introduce your audience to your brand, your values, and your subject matter expertise. You frame your narrative and overcome audience resistance. However, a big part of that is accepting that you have competitors, and addressing that in your content.

By talking about his competitors first, in honest and genuine terms, Sheridan built trust with his prospects. Because he wasn’t trying to make a sale, he was trying to guide them on the right path and provide customers with all of their options. Since Sheridan was willing to tell them the truth, every customer that spoke to him knew that they could count on him.

#2. He received notoriety with his competitors.

It’s not often that a competitor will share your content. Why would they? There’s not any benefit to them. However, if a competitor did share your material, it would reach all of the customers that you’re trying to win. That’s what so brilliant about Sheridan’s approach.

Since Sheridan was so positive and spoke of his competitors in the highest regard, his competition would share and distribute his content. As a result, he became a content marketing powerhouse. He won a lot of referrals from cement pool installers, for example, who has customers who decided they wanted fiberglass. By playing the long-game, Sheridan expertly snagged customers that would have gone to another company.

Imagine if someone googled one of your competitors, and one of your articles came up. Well, when Sheridan started his competitive SEO content writing tactics, that’s precisely what happened. Since the feedback was so positive, people were sharing and engaging with his content. As a result, he began to rank for his competitor’s branded terms.

It was another opportunity to engage with his target audience. By ranking for his competitor’s branded terms, he could introduce himself and make a positive first impression to a potential customer who was considering his competitor.

#4. He built up his domain authority.

Domain authority, or a search engine ranking score that Moz calculates, is based on how likely Google believes your content will rank. And it takes time to build. For new companies in highly competitive industries that are starting with SEO content writing, domain authority takes time to develop.

However, when you go after competitive terms and successfully rank for them, your domain authority builds up faster. To rank for that content, you need material that’s going to get a lot of engagement. The content that Sheridan produced did exactly that, which helped him gain traction a lot quicker.

Since he continually ranked for those competitive terms, his domain authority skyrocketed, to the point where he displaced his competitors’ rankings completely. It required some patience and lost him leads to other companies, but in the long-term, gave him everything he needed to get a lot more organic traffic and customers.

Getting More Clicks From Organic Traffic

When you’re trying to get organic traffic, every single click counts. You need content that’s going to attract and impress your target customer, which is why Sheridan’s tactics are so effective. However, you can’t just write a few blog posts about your competition and expect to get results.

You need an entire strategy to inform the topics and subject matter you’ll cover in content, as well as a plan to distribute, share, and use that content to nurture your leads. The content needs to provide tremendous value for your entire company. We invest in inbound marketing to help us create these strategies, which we have listed in our free guide, Conquering The Inbound Marketing Mountain.

In Conquering The Inbound Marketing Mountain, you’ll learn how to create an overarching inbound marketing strategy that will help you craft highly effective SEO content writing.