Remember when Toto pulled back the curtain revealing that the big, powerful, and scary Oz was no more than a bunch of pulleys and levers?

That’s what we’re about to do.

We’ve done a lot of great marketing campaigns for our clients. And, we’ve published a lot of helpful content about what we do and why. But, to this point, we’ve never pulled back the curtain and let you watch us run those campaigns.

The Marketing Diary: Episode One

Gary Vaynerchuk is an inspiration for a lot of marketers. But, he recently said something that really stood out to me: he said to document rather than create content.

If you’ve followed Gary Vee’s content recently, most of it is just clips of him speaking or talking one-on-one with people. He’s not producing a show, he’s documenting what he’s doing.

So, when our head entrepreneur, Kevin Barber, told me he wanted to increase our traffic and leads at 10% month over month, I laughed.

Then, when I realized he wasn’t kidding, I fainted.

Then, when he didn’t change his mind, I started making a strategy to accomplish it.

Here’s what I learned in that process: what we were doing had us growing - but not at that rate. If we wanted to experience remarkable growth, we were going to have to step out of our comfort zone and do things we had never done before.

Starting at Square One

Before we talk about what we’re going to be doing, it’s important to set the stage and give some context. But, before I unveil our current situation, I need to preface it with the backstory.

Don’t worry, it’s not as lengthy as, say, Darth Vader’s.

If you jump back to 2014, Net Profit Services was in the process of a shift into Lean Labs. With that shift, the decade-old web design company transformed and became a digital marketing and design company. And, we set some aggressive growth goals.

As you can see from the chart, we grew our traffic considerably, especially considering we didn’t do any paid traffic. Most of our traffic was generated from Organic Search, and guest blogging on sites like HubSpot.

To make a long story short, in 2016 a great (and terrible) thing happened: we grew too fast.

To give some perspective, we had a 5-year revenue growth plan, and in 2016, we exceeded our 2017 numbers. We had a great year, and a lot of clients.

And, it broke us.

We weren’t ready for that type of growth. We didn’t have the manpower or the structure to handle that many clients. Now, we handled it like a boss, but we did end up dropping the ball on our most important client: ourselves.

We stopped spending any energy on ourselves. We put some writers on our blog, and pretty much gave them carte blanche to publish - which resulted in a few blog posts we weren’t very proud of appearing on our brand.

That’s how we operated for several months - totally focused on clients and letting our own brand fall through the cracks.

As you can see, our growth didn’t tank - it kept growing. But here we are in 2018, 4 years later, and we’re not where we wanted to be. We’re not complaining, because revenue-wise, we are still on track for our original goals, but when it comes to the performance of our own marketing, we wanted to be so much further along at this point than we are.

So, in 2017, we decided enough was enough. We brought on new talent, and spent a fortune redesigning our own website. Towards the end of 2017, the new web experience went live, and Kevin turned his Sauron-type eye toward the Inbound team.

Now, it’s our turn to show what we can do. 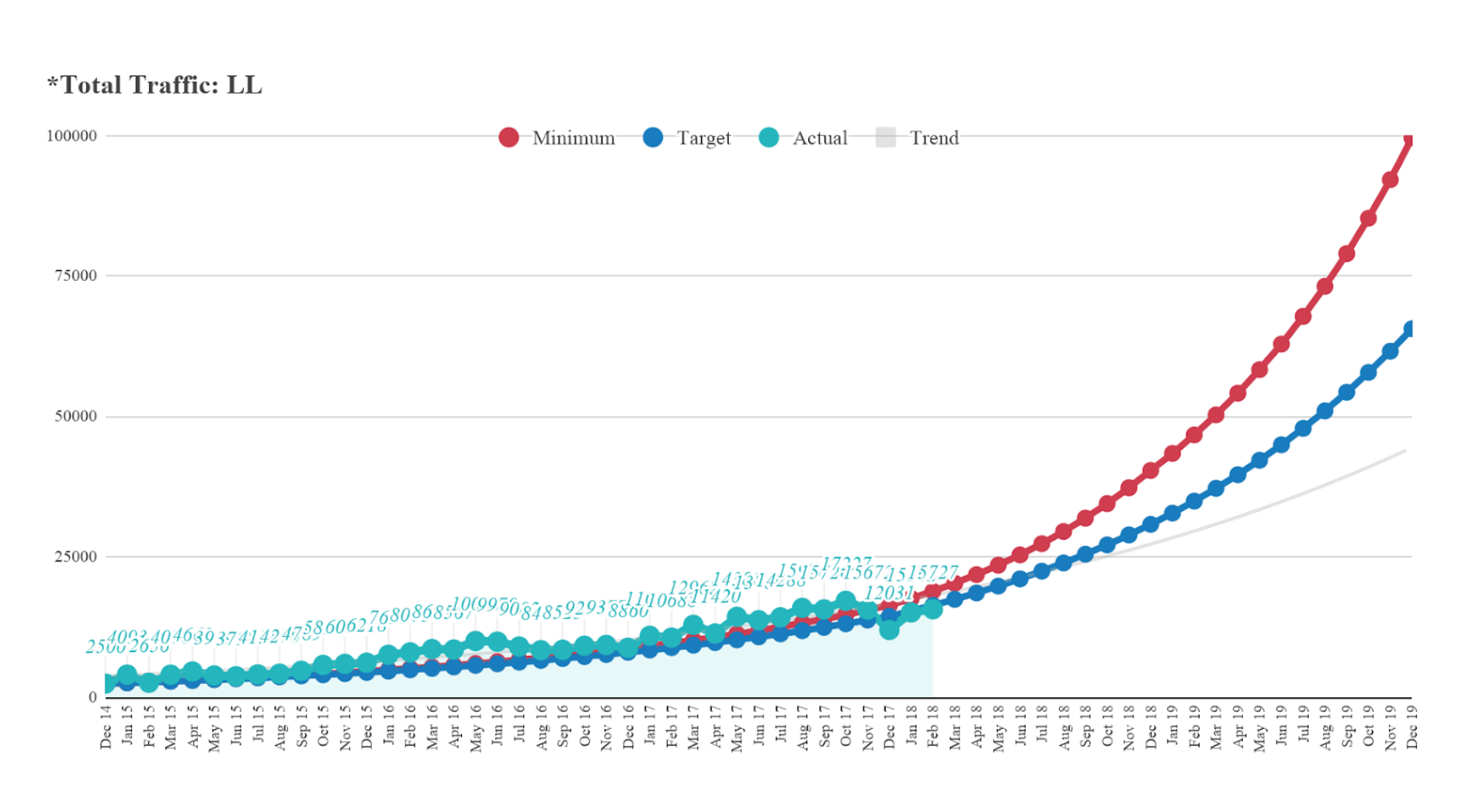 If the charts aren’t clear enough, we’re pushing for 10% month over month growth - and not just traffic, but in leads and sales opportunities as well.

We’re not doing too bad - March saw a 14% increase over February (thank you extra 3 days!).

But, to have that kind of growth on an ongoing basis, we’re going to have to implement new things we’ve never focused on. And, that’s what has me the most excited, and that’s why we’re sharing these diaries.

For most of 2017 and so far in 2018, we’ve published on-average, two times a week. Our favorite days have been Tuesday and Thursday. Starting in April, we’re going to be publishing five times a week.

That’s a 150% increase in publishing frequency.

We’ve never pushed that kind of volume on our own brand before. It takes a lot of effort and hours to have that kind of publishing schedule, and hold the quality bar high. But, we’re going to do it this year.

We’re an organic traffic company. We’ve always placed our bets on knowing how to win with Google, and we’ve done well. Here’s the overall success we have with driving traffic with all of our clients in a single chart.

As you can see, out clients have enjoyed traffic growth rates above 20% quarter over quarter, for the first 21 months in a row. After that, it slows down a bit, as most of the clients we have had longer than 21 months are at a lower retainer than those in the beginning months.

But, that’s not enough to hit our goals. So, we’ve developed a very aggressive content distribution and promotion strategy. We’re going to double-down on the communities our target personas spend their time, and become a recognizable presence in those communities.

Internally, we’ve been talking about video for a long time. And, the time for talk is over. Video is the next wave of content marketing, and if you’re not doing video in your marketing strategy, you’re getting left behind.

Our video strategy includes a lot of preparation, which we’ve been doing behind the scenes for several months. We’re ordering lighting systems for all our front-camera personalities, and getting the format of several video-centric content styles ironed out.

Ultimately, we’re starting a brand new YouTube Channel, and it’s going to get flooded with high-value videos over the next year. And, we’re going to utilize our new content promotion strategy I just mentioned to get them some attention.

You should subscribe to our new channel here, to keep up with what we’re doing on YouTube.

Remember, we abandoned our own marketing like Mr. Wilson ran off and left Tom Hanks all alone on his little raft. And, with that, our social channels suffered.

But, that’s old news. We’re going extreme social throughout 2018. You can expect Instagram updates, images, and videos giving you some behind the scenes look at Lean Labs (we’ve never done that before). You can follow us on Facebook, where we will do content shares, and Facebook live broadcasts - maybe even some free live webinars as well.

So, as you can see, we’ve got a lot of things in the oven. Since I recovered from the fainting episode, I am now super-excited to put this into action. I know we’re going to make mistakes - I’m good at that part. But, we’re also going to experience tremendous growth.

We hope you follow along and learn something as well. We’ll see you in a month with another update!