Neil Patel isn't a big guy, but what he says and does carry a lot of weight in the content marketing world.

Since the handful of words in the title are arguably more important than the hundreds of words that follow combined, we thought we'd analyze how Neil writes titles.

We put 334 of Neil's most recent blog titles into a spreadsheet and looked for some common themes. Here are seven things we learned.

We'll take a look at what we can learn from these post types below and draw a few more conclusions from the data. 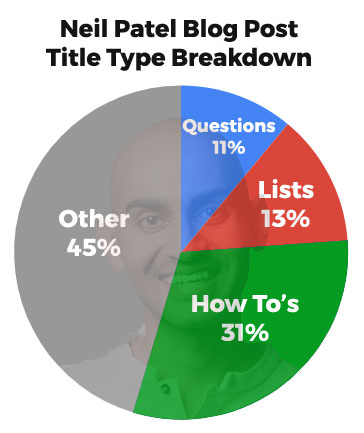 Of the sampling we analyzed, 43 posts were listicles. See if you can pick up on a theme from this screenshot of the data: 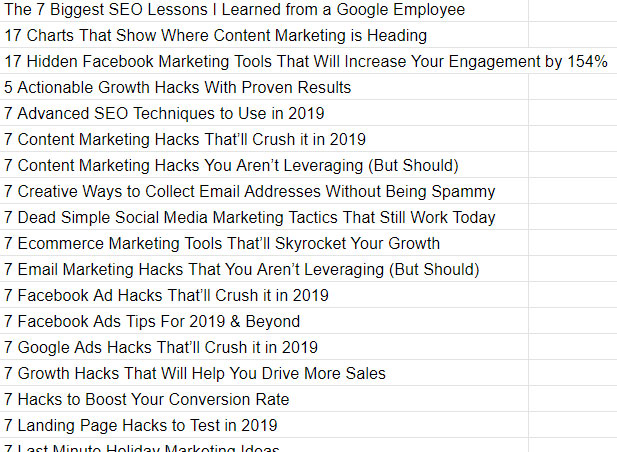 It doesn't take a statistical genius to see that Neil favors the number seven for his lists. In fact, 37 of his 43 listicles were lists of seven (and two more were lists of 17).

So, what's the deal with the magic number seven?

I've always associated the number seven with completeness, which would make sense in the case of lists. If you have a list of seven, you've covered everything. Your list is complete.

But, according to Guy Winch, Psychology Today Contributor, there are more explanations for our like of the number seven. Six more, in fact. In Seven Reasons We Are Captivated by the Number Seven, Winch spells them out.

Another common theme we spotted when looking through Neil's blog post titles was the use of the second person pronoun. Nearly half of the titles (148) included the word "you" or "your." By comparison, only a small portion of titles included a first-person pronoun such as "me," "my," or "our" (45).

Since Neil's name is well-known in the digital marketing space, he can get away with talking about himself. This post is an obvious illustration that we want to know what Neil thinks. But, by comparison, Neil talks about "you," the reader, much more often than he does himself. I think he's onto something.

By using "you" a lot, the focus is obviously on solving the problem of the reader, which should be our goal as marketers. It's why we call what we do at Lean Labs customer-centric marketing. Our prospects and clients are the heroes, not us. We're here to help them solve their problems, not talk about ourselves. They're Frodo; we're Gandalf. They're Luke; we're Obi-Wan. To learn more about our five keys to customer-centric marketing, click here.

A study by the Journal of Interactive Marketing in 2017 revealed that the use of second person pronouns has a measurable effect on marketing messages.

By getting the reader to "self-reference," they internalize the content and envision themselves acting on it.

"How to"s make up 102 of the 334 posts we analyzed and another 43 include the word "How." While it probably isn't a surprise that "how to" is a common post type, it may be surprising just how often Neil uses it.

But we know a lot of people ask Google questions, so it makes sense to use the types of questions that people are asking in titles.

A search on Google for "how to" turned up over 18 BILLION results. Billion with a B. That means there's a lot of people creating "how to" content.

Are they on the right track?

Of the 1,000 most common questions asked on Google, 512 are "how to" questions. That's a lot more than any other question type.

Did you notice that we got all three of these first points in the title of this post, "How to Write Blog Post Titles Like Neil Patel (7 Things You Should Try)"? Neil would be proud.

Other than the lists of seven, this takeaway is the most surprising for me. Neil's titles vary widely in length. Here's a histogram of the number of characters in his blog post titles.

In a further breakdown, we found that both the average and median character length was 47. But, as you can see from the histogram, the lengths are all over the place from 16 to 81. Most content marketers try to get as many keywords as possible in the title without truncating on Google SERPs at around 70 characters. But Neil's titles are all over the board.

Neil's word choice in titles tends toward simple vocabulary. The average characters per word was 5.7, and the average words per title was 8.3.

5. Ask "Should You?" Questions

Of the 334 titles we looked at, 37 included question marks. Asking questions is a great way to get someone interested in the post and entice click-throughs. If you can create an open loop with the promise to close it at the end, you have intriguing content.

It's hard for us to let go of unanswered questions.

The most common question type was "Should You...?" Here are some of the recent "Should You?" post titles from Neil's blog.

Takeaway? Use the year in post titles starting just before Thanksgiving to show that your content is up-to-date, and stop using them shortly after February, before using the date causes the opposite effect.

No, we're not talking about coughing your brains out or breaching cyber-security walls.

One of the most common words Neil uses in his headlines is "hack(s)" at 31 times. We count this as one of the major takeaways because "hacks" can be used in titles in almost any industry. Neil uses marketing and SEO more, but those are specific to his audience.

Here are some other notable words that show up in his headlines with regularity (that we haven't covered already in this post).

We almost got all of Neil's favorite words in that header.

We could have gone with "How to Increase Organic Traffic," but that wouldn't have been near as fun. But, seriously, along with following Neil Patel's lead on post titles, you can get great rankings on Google by following the advice in one of our eBooks which you can access right now.

Check out our free Ultimate Guide to Increasing Organic Website Traffic to learn the following.