How We Optimized for Featured Snippets and Got Thousands More Visits

What if you could increase organic traffic to your blog by the thousands simply by making minor tweaks to a few posts?

Sound too good to be true? Initially, it seemed that way to our team.

In 2018, featured snippets—those content nuggets that show up at the top of Google results for certain queries—had been causing a stir in the SEO community. HubSpot successfully demonstrated that you could optimize content to get that coveted "Position 0" in SERPs.

And owning more real estate at the top of search results can't be a bad thing.

The question is—is it worth it? Do featured snippets turn into an actual organic increase?

Some members of our team were skeptical. Surely, it wouldn't make that big of a difference. So, we thought it would be good to run an experiment and see what would happen if we optimized for featured snippets, just to see if we got a little boost.

We didn't get a little boost; we got a big one.

We'll show you how we chose which posts to optimize, the exact tweaks we made, and the impressive results below. It's an easy and fast process which you can implement on your blog to increase traffic with very little effort.

It really is that simple.

Before we go further, let's look at how Google currently displays featured snippets. There are two types of snippets which content marketers can optimize for—list and paragraph.

List featured snippets show a bullet list of items. Usually, seven or fewer are shown along with a link to the article they're pulled from to learn more. 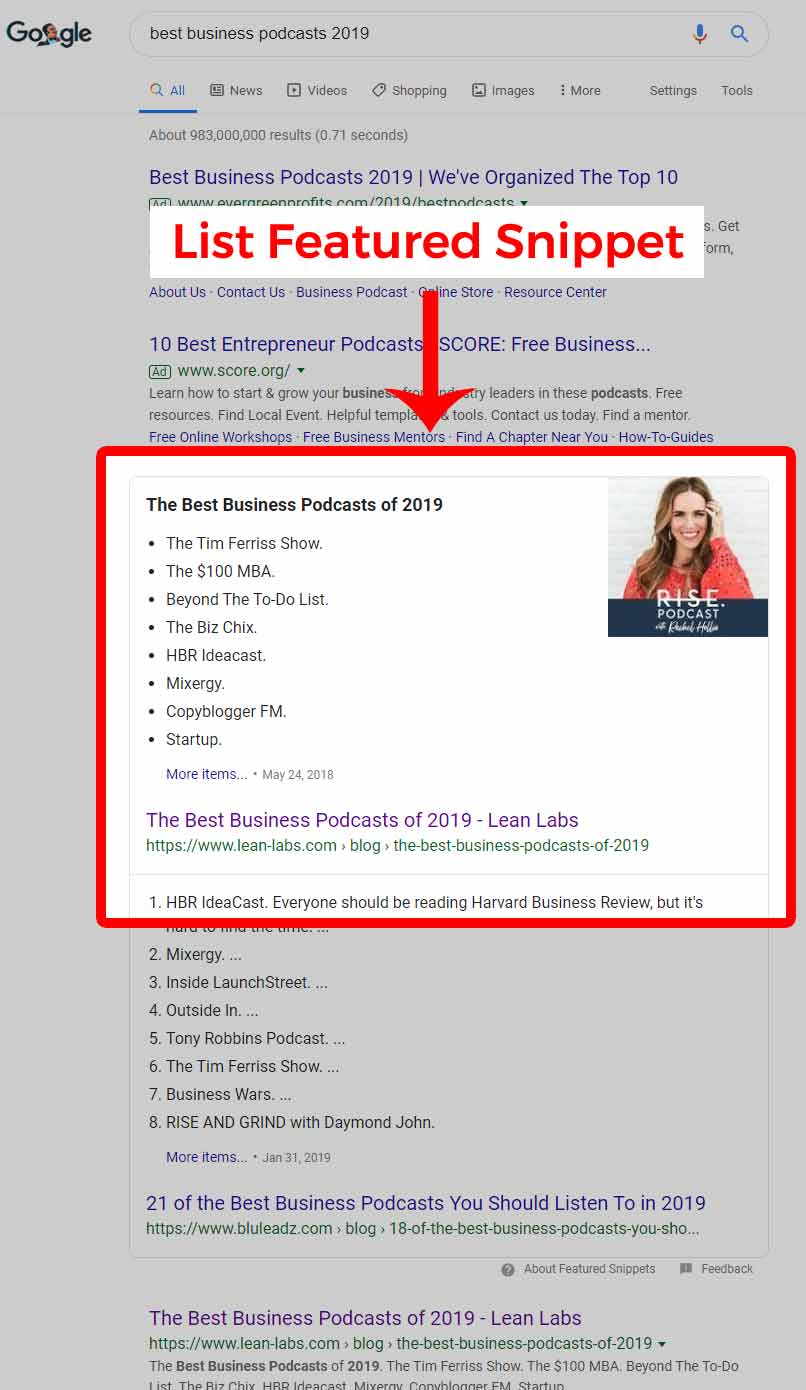 Paragraph featured snippets are generally 50 words or less and lean toward definition-type content which explains or defines the keyword concisely.

Analysis shows that Google pulls snippets from posts in the top five spots of their SERPs. So, we looked for keywords where our posts already ranked in the top five positions.

For this experiment, we selected 15 posts that were already ranking well for popular terms, but which didn't occupy the featured snippet spot.

In October and November of last year, we optimized those 15 posts and won five featured snippets over the next few months. While we obviously didn't get a boost from every tweak, the overall lift from our successful optimizations was well worth the minutes we spent on this experiment.

If you haven't noticed, the number of content marketers churning out blog posts has drastically increased over the last five years, so it's harder than it used to be to get organic traffic. You have to be great at content to get a lot of visits and you have to be able to change beliefs with that content (that's what marketing is) once you get that traffic. That's one of the industry secrets we reveal here.

That's why being smart with your time to get more traffic with snippet optimization is a good move. Use the techniques below for max ROI on your time.

Let's look at each of our five winners in a little more detail.

The keyword "brand strategy document" gets 20 searches per month and our post, Crushing the Brand Strategy Document: Make it Short and Compelling was already ranking in the first position.

SERPs for the keyword showed a featured snippet from the fifth-ranking post by marketingmo.com.

The change we made in late November was to rework the paragraph under the H2 to provide a clear definition of what makes up a brand strategy document. NOTE: We made additional changes to this section in July of 2019 as part of another experiment, but we already had Position 0 locked down by that time.

The result was an almost overnight doubling of organic traffic to that post. We went from 250 visits per month to over 600 visits per month. We already had the top position, and we retained it after the change, so the vast majority of the increase can safely be attributed to the adjustment.

The keyword "hootsuite or hubspot" gets 10 queries per month. By November of last year, we already owned the top position for that search and several variations with HubSpot vs. HootSuite: Which Tool is Best for Running Social Media? and traffic had leveled off. Financesonline.com had the featured snippet with a clear definition of each of the platforms.

Our optimization was to add a paragraph directly under the H2 with "Hootsuite is ..." and "Hubspot is ..." definitions explaining what the platforms are in simple terms.

We held onto the #1 ranking, won the snippet and, as you can see in the image above, Google added a "People also ask" section to that SERP, so we had successfully captured nearly all of the above-the-fold real estate.

After the holiday dip in December, a traffic increase has held relatively steady at around 100 visits per month throughout 2019.

The keyword "brand strategy examples" gets 480 queries per month. Our post How to Stand Out From The Crowd: 7 Brand Strategy Examples ranked in the number 2 position behind figments.com.

The figmints.com post wasn't particularly well formatted, so we knew we had a good opportunity here. Their featured snippet contained a combination of unnumbered and numbered items which looked odd in the featured snippet.

Our solution was to add a simple numbered list under the H2 of each of the brands we featured in the examples below.

Google picked up on that change and awarded us with the featured snippet which included the list, a short paragraph, and our H2 as well.

We held onto the #2 position, and the change resulted in a net positive traffic increase throughout the spring, though it looks like we lost the snippet temporarily over the summer and regained it in August.

About 90 people search for "growing business ideas" each month. In the fall of 2018, we were in the top position with 14 Growing Business Ideas (And How to Get Started), but oberlo.com owned the featured snippet.

The oberlo.com post was another example of odd formatting in the featured snippets where you have bullets and numbers. Google didn't recognize the "#1 ... #2..." in oberlo's post as a numbered list.

Our post also used a "#1 ... #2..." formatting in the headers, which HubSpot's study found to be problematic for featured snippets, so we decided to remove the "#"s from the header items. We also changed our H3 to an H2, corrected the number from 14 to 15, and added an ordered list directly underneath.

We held onto the #1 ranking and won the snippet with a longer list showing than oberlo's which means we own even more SERPs real estate.

We made the optimizations in late October and, after the holiday dip, organic traffic has been steadily climbing throughout 2019 to the tune of hundreds more visits each month.

The "b2b lead nurturing best practices" phrase is searched 20 times each month. Our post 10 B2B Lead Nurturing Best Practices ranked well, but organic visits had been steadily dropping through the late summer and fall of 2018. Though we held the number 1 ranking in October, we were leap-frogged in the list featured snippet by autopilothq.com. 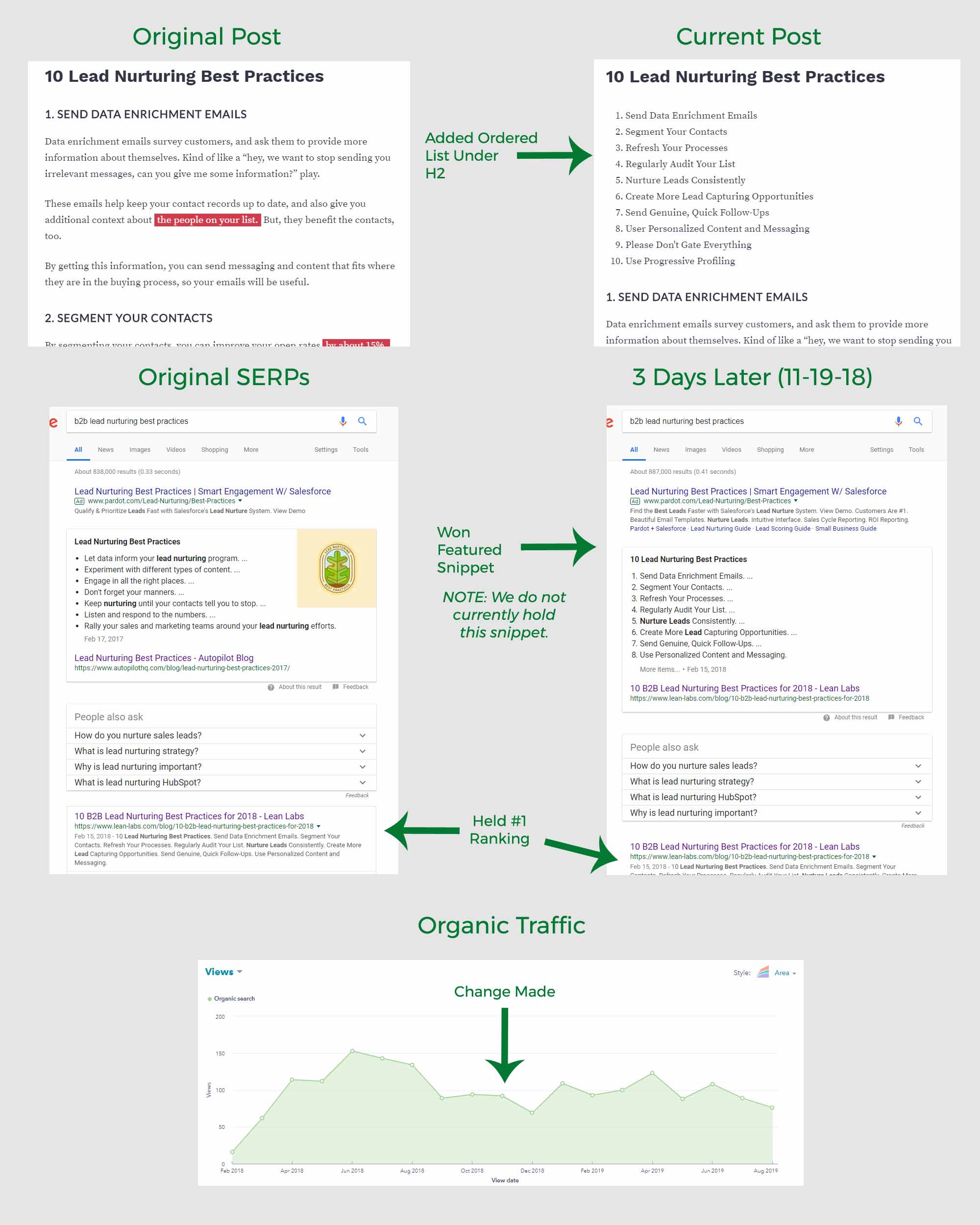 Per HubSpot's recommendation, we added an ordered list directly under the H2 to optimize for the featured snippet. Within three days, we had won the snippet and remained in the number 1 position.

Though we don't currently hold the featured snippet, we had it through most of 2019. The successful winning of Position 0 halted our traffic slide and brought us some modest gains over the last few months.

Are There Any Downsides to Optimizing for Featured Snippets?

Some members of our team expressed concern that adding the sometimes long ordered lists under the H2s would annoy readers and result in negative on-page statistics.

But the changes have had no adverse consequences in terms of on-page user interaction data. Average time on page and bounce rate for the pages we optimized have either remained steady or slightly improved.

How to Proactively Optimize for Featured Snippets

While it makes sense to go back and optimize high-performing posts which you've already published, you'll also want to keep featured snippets in mind for the future.

Why not optimize for snippets upfront so that you don't have to go back and fix them later?

When I do research for a blog post outline, I check to see if the SERPs for the target keyword include either list or paragraph snippets. If they do, then I make sure to include a numbered list format for list snippets and a definition section under the H2 for paragraph snippets.

That way, I'm set for the future.